Drone market today is largely dominated by one manufacturer, DJI. Drones from DJI are so popular that it isn’t so uncommon for production lines to fail to keep up with demand when a new drone is released, like it was the case with Mavic Pro. Months after Mavics’ release many enthusiasts were still waiting to get their hands on one.

For this reason, when talking about market shares you’re going to have to mention DJI a lot. They hold a good chunk of the market in the mid to high end drone segment, and manufactures like Parrot and Yuneec have only just now started making dents in DJIs market share. 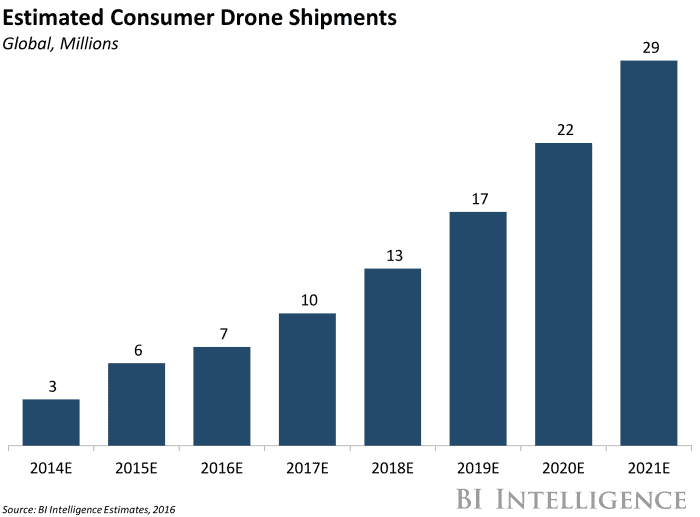 To find out about the growth of the drone industry over the last few years the best statistic to look at are drone shipments, year-to-year. Chart above, courtesy of Business Insider, does exactly that. Note that these numbers include both hobbyist (like toy and photography) and professional grade drones (used in military, industries, etc).

Biggest jump in drone shipments in the recent years happened in 2014, going on 2015. Number of drone shipments doubled, and things have sort of died down since then. In 2016 there was 7 million drone shipments, only 1 million more than in 2015. Production has ramped up this year and there’s going to be an expected 10 million new drones shipped in 2017, about 40% increase compared to previous year.

Predictions for the future in the chart above show that things are looking very bright for the drone industry. By 2021 the number of drone shipments is set to quadruple, to 29 million drones shipped globally.

That is a mind boggling growth rate, but it doesn’t come as that big of a surprise when you stop to think about exciting new uses professional and enterprise grade drones are finding. Like agriculture, firefighting, construction, military, etc. Image above shows Parrot Bluegrass, a professional grade drone from Parrot that’s aimed at agriculture. Let’s get a closer look at each market segment and see which drone manufacturers are most popular in it.

One market segment where DJI isn’t dominating, but only because it doesn’t have drones this cheap, is in the under $500 price bracket. Despite $500 being a decent chunk of money, DJI Spark, which costs around $550, depending on where you buy it, is the only model from DJI that’s close to being able to compete in this price segment.

This absence of competition from more famous manufacturers has opened up the doors for brands like Hubsan, Syma, MJX, Holy Stone, JJRC, Cheerson, Eachine and relative newcomers to the commercial drone scene like Wingsland to survive and thrive. I recently made a review of Wingsland M5 which costs around $250. On our website you can also find reviews of similarly priced MJX Bugs 2W and Holy Stone HS100.

Since there are so many different companies competing here, with countless models of drones, it’s difficult to get accurate statistics on their market share. Consumer Technology Association has been tracking drone sales and published data according to which out of all the consumer drones sold in the US, about 65% were drones that weigh under 250g.

What does drone weight have to do with anything, you’re probably wondering. Well drones in this price segment are usually small and light, around 250g. You could use this statistic to get some broad sense of the market share that these smaller drone manufacturers hold. Keep in mind that even though we’re talking high volume sales, due to low prices of $100-200 profit margin isn’t that high in this price segment like it is selling $1000 or $2000 drones.

$500-1000 price range is considered to be mid-range drone market segment and it is where two things start happening. First, we leave the sub $500 “entry level” drones, and second we are entering into the realm of the king. Yes, DJI actually has 2 drones in the price range, Spark and Mavic Pro. 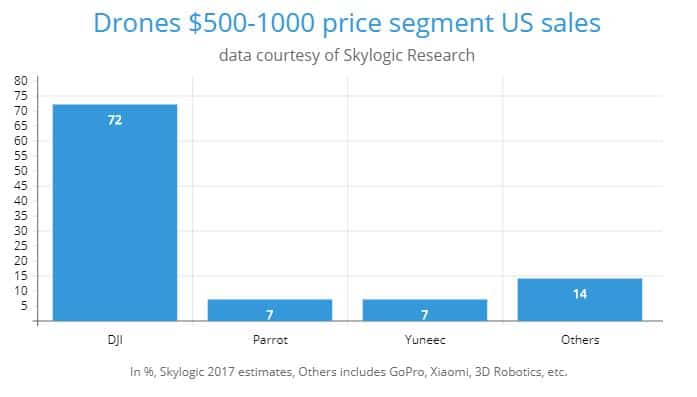 According to figures from Skylogic Research, in North America, DJI holds around 72% of the market in this price range, followed by Parrot and Yuneec with each holding around 7% of the market. Xiaomi and GoPro have tiny fragments of the market, but that might change in the future. 3D Robotics is a US based drone startup. They had big plans and held a decent chunk of the market, but last year they announced they are shutting down drone production because competition from DJI is too fierce.

The last market segment we’re going to be talking about is reserved for drones that cost over $1000 and $2000. Truth be told, there is very little to talk about here. I’d make a chart but it would look very similar to the one pictured above because DJI again holds a rather astonishing 70% of the market, according to Skylogic.

Same thing is pretty much true for drones in the over $2000 bracket, DJI holds this market segment firmly with close to 70% of the drone market. We’re now approaching professional and enterprise grade drone pricing, and very few drones have come out lately that justify such high pricing. Parrot has just recently announced their professional grade drones Bluegrass and Bebop-Pro Thermal. They are the first step in the right direction in trying to end DJIs market domination.

Conclusion – Lack of competition, good for DJI, bad for the consumer

I’ve been going on how DJI is dominating the drone market, and you can see from the figures above how this is true. On top of that, all the companies who are competing with DJI have been having big financial problems. Parrot recently underwent restructuring and was forced to lay off a part of its workforce. 3D Robotics has completely given up on drone manufacturing and is now focusing on software solutions only.

With the amount of competitors which are going out of business or are have financial problems, DJI is very close to becoming a monopoly. Company value is estimated at a very high 10 billion dollars. This is made possible by the fact that DJI dominates the commercial and professional drone market, and that’s where highest profit margins are made. 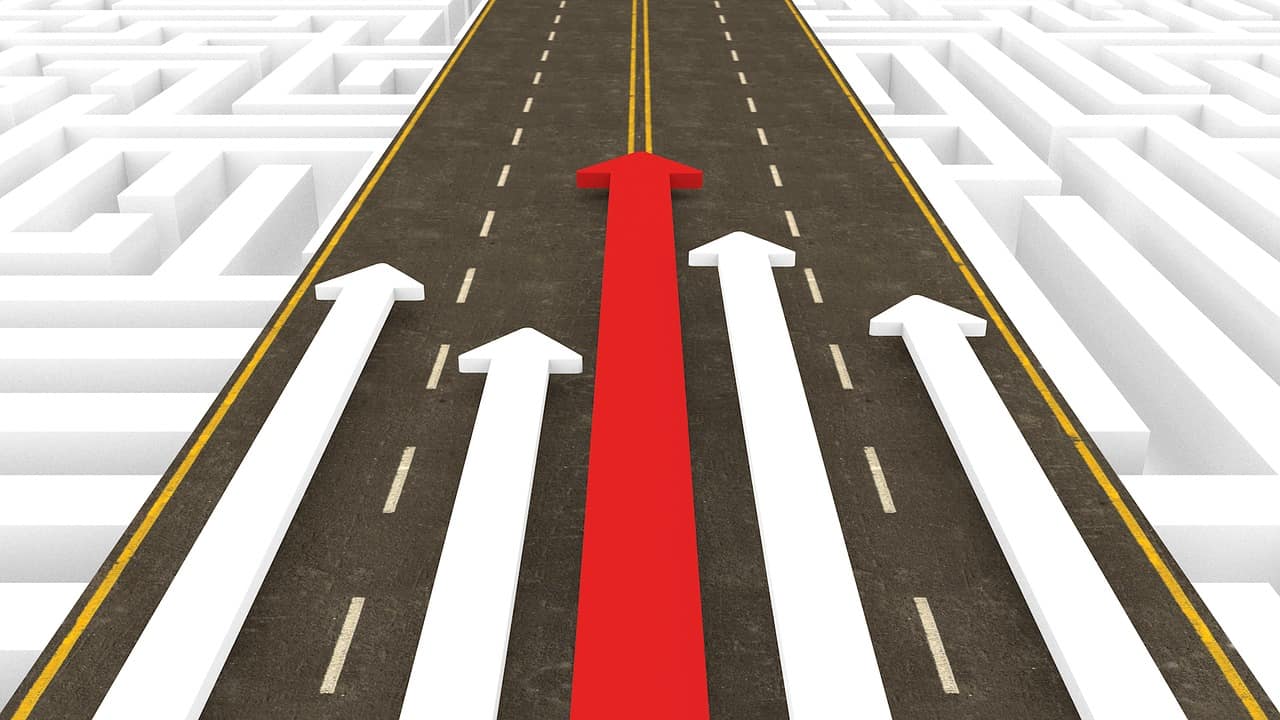 Smaller drone manufacturers might sell more drones, but these include toy drones sales that cost less than $100. Profit margins on that are peanuts compared to making a sale of a $4000 professional drone. Even though DJI has around 1500 people employed in the research and development, having just one manufacturer hold that much market is never good for the consumers.

We need more drone manufacturers to be competition to keep DJI in check. Without competition they will stale progress and keep prices high making high quality drones a thing that only enthusiasts can afford. They for example already became sloppy when it comes to user data security. I personally plan on supporting Parrot with my next drone purchase. Bebop 2 looks awesome, although camera could be better. What do you think, do we need more competition in the drone industry? Leave a comment down below and let us know what your opinion is.

As I was saying Zoran, don't worry. Competition is just around the corner. Aerial Robotic Systems is in very late stage development of the Flex. We're talking powerful. Lift 25+ kg and fly for hours and hours. Too many missions to cover here, but think, Ag, Military, Search, Disaster, First Responders, Ship-to-Shore, Surveillance, Packages, and of course the biggest RED cameras.