Home
Drone Reviews
XIRO Xplorer Mini – Is This The Best Selfie Drone Out There?

After tampering around with Zerotech’s Dobby (a review on this one is scheduled for the near future), it’s safe to say I was amazed by its performance. I could not believe that our technology is so advanced that we can cram up so many features and sensors into such a small device. Needless to say, I was astonished by its performance but unfortunately, I had to return it to my friend as he only gave me 2 days to test it out. That’s why I went ahead and order another very similar drone. If you are familiar with XIRO Xplorer, then I’m sure you can already feel that this is going to be a good one!

Meet XIRO Xplorer Mini. It is a miniature foldable drone with an excellent design that will definitely capture the eyes of many. Truth be told, other than its name, Xplorer Mini does not share any visual factors with its big brother. None at all! But that is not necessarily a bad thing since this little guy looks absolutely awesome. The build quality is solid. The drone feels sturdy in hands and seems as though it can take quite the beating. The design is superb. That beautiful black finish with yellow, red and green finishing touches makes it look rather fancy and stand out among others.

Camera quality is of utmost value for all selfie drones including this one. That’s why its creators made sure they place a great camera that will suit the needs of all selfie maniacs. With a great 13mpx sensor and 190* fisheye FOV, this camera is bound to capture excellent aerial shots of you and your friends and family. Even though the drone itself doesn’t have a stabilization system for optimal photo and video smoothness, the final products are surprisingly clear. Even if you are recording longer videos, the notorious jelly effect that occurs with many cheaper drones nowadays is not present. That’s something that struck me with surprise as I have to admit I did not expect that. Not by a long shot. The camera is able to capture shots in the standard high definition 4208*3120 resolution. On the other hand, the videos are captured in a bit lower resolution but are still great nonetheless. They are captured in full HD (1080p) at 30FPS. Lower the resolution down to 720p and you’ll get the PC master race friendly 60fps. All in all, XIRO Xplorer Mini’s built-in camera is pretty good and will certainly provide you with plenty of selfies no matter what’s the occasion!

Judging by the fact that we are talking about a miniature selfie drone here, it is not that surprising that it has a ridiculously small range. First, you have to understand that this is not an exploring drone. If you want that type of drone, then take a look at models such as Hubsan X4 H109S. You cannot expect those sorts of things from this little fella. It is best used as… how should I put this delicately… a flying camera! I doubt you’d want your flying camera to take pictures of you and your friends from more than 100 meters away from you. That’s pretty much the maximum range of XIRO Xplorer Mini – 100 meters. While it might seem short at the first glance, if you’re planning on using it for selfies and similar stuff like that, then 100 meters will be just enough.

And finally, after you’ve heard many praises for this great little drone, we have come to the part where I will talk shit about it for a change… Pardon my expression but I just had to let that out of my system… plus this is, after all, a XIRO Xplorer Mini Review. Why am I so mad? Well, XIRO Xplorer Mini is equipped with a smart 1650mAh LiPo battery that can last up to 15 minutes in the air. Now, I do understand that it is difficult to place a bigger and stronger battery in such a compact size, but for the love of all that’s good, why not place at least cca 2,5kmAh battery that can at least hold this little fella in air for more than a single commercial break… It’s absurd. 15 minutes might be enough to take a couple of perfect selfies, but that’s about it. Once you are done with that you are left with no other option than to go home and plug this sucker in to charge it up. Needless to say, I was pretty disappointed (and enraged) because of this… 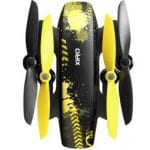 XIRO Xplorer Mini is not shy when it comes to its features. As a matter of fact, it is full on bragging with them and, truth be told, there’s plenty of stuff to brag about. For instance, this little fella is equipped with both GPS and GLONASS systems, making it extremely stable in midair. This also allows it to have those standard features such as hovering, auto return to home, low power protection, lost connection protection, and best of all – smart flight modes with support for FPV. To top it all off, this little fella is foldable (I believe I mentioned this at least a couple of times over the course of this review…) meaning it is extremely mobile and will fit into virtually any sort of purse (even man purse).

The biggest XIRO Xplorer Mini‘s competitor is definitely the drone that I mentioned at the very beginning of this review – Dobby by Zerotech. Both of these drones have similar price tags to their names, and believe it or not, pretty similar characteristics as well. XIRO Xplorer Mini actually has a longer lasting battery than Dobby (only 8 minutes), but an inferior camera (Dobby has a 4K one). Subjectively, I believe XIRO Xplorer Mini wins this fight as it is a better overall product… but still, that’s something you will have to decide for yourself.

Zoran Valentak
Zoran Valentak is a freelance writer focusing on tech, cyber security, and fintech. He has a Bachelor of Science degree in exercise science and a Master of Education in Economics.

His work was featured in a variety of publications including BBC, TechCrunch, DJI Blog, HBR.org, VICE and many more.

Zoran is a hard-worker who never takes "no" for an answer, and thinks it's blasphemy when someone says something negative about Autel Robotics.

DronesGlobe is supported by you, our readers.

In order to keep our site running, we may earn an affiliate commission when you buy through links placed on our site.

Here you can read our full Amazon Affiliate Disclosure.